These two letters were written by Philip (“Phil”) Nugent (1842-1933) who emigrated from Ireland in 1848 with his parents—John and Mary Ann—as steerage passengers aboard the Helen Augusta and then made their way to rural Darlington, Lafayette county, Wisconsin. Philip enlisted as a private in August 1862 in Co. B, 23rd Wisconsin Infantry. He was wounded in the Battle of Carrion Crow Bayou on 3 November 1863 and transferred to the Veteran Reserve Corps six months later. He mustered out of the service in July 1865.

Magnolia Hills [in] the rear of Vicksburg
July the 4th 1863

It is with pleasure I sit down to write you these few lines hoping they will reach you and find you in good health and all the family as this leaves me in at present with the exceptions of the ague. I am troubled a great deal with the shakes every day. Well, Willy, I hope you are enjoying yourself today and I suppose you are. But you don’t feel half as good as I do seeing the Old Star Spangled Banner floating over the publick buildings all through Vicksburg. I can assure you, it is a glorious sight to every soldier here.

We [have been] for the last 6 weeks now in line of battle within 100 yards of the rebel rifle pits where it was nothing but heads down. A man could not stand up straight for fear of getting put down by a shell or ball and the Rebs darnt not poke up their heads or it would be taken off by a hundred balls. So you must think what a time we had. We drove them on like a flock of sheep before us until we got them in a pen around Vicksburg. The [we] throwed hot shell into them that made then hunt their holes. Every morning about daylight, they would try to break out of their pens but we always stood ready to give them their morning pills and drive them back.

Yesterday morning, Gen. Pemberton—the head general—come to our general and wanted a conditional surrender—that was to take his men and everything he had and leave. But Grant would not listen to no such conditions. He wanted to go the whole hog or none, so he gave them until 7 o’clock this morning to consider about it. If they would not surrender by that time, every gun in the line was planted ready to open on them today. So 4 generals come last night at 12 o’clock to make another proposition but all would not do. They wanted to have Grant parole the men tight there but he would not listen to that. He wanted to have his own way about it and do what he thought fit with the prisoners.

We thought we would have hard work today but they surrendered this morning at 6 o’clock and all is ours. I don’t know how many prisoners we have yet but we see 60,000 this morning when they stacked their arms. But we did not see near all of them. We are now guarding Butternuts but suppose they will be sent away in a few days. This is a heavy blow on the Rebs.

Well Willy, our regiment still keeps in good spirits and is rugged. [We have] come though 5 engagements and only lost 85 men. It’s getting most too hot to fight now but I suppose we will have to go down to Port Hudson but that will be an easy task for us. Then the Mississippi river will be open clear through to New Orleans.

Well Willy, I received yours of May the 23rd but was waiting until I would know all about Vicksburg. So now I can write with pleasure and write cheerful even [though] I am sick. I shake every day and the fever lasts from one shake to the other so it keeps me in misery all the time.

Well, I believe I told you all about the particulars of Vicksburg now so I will bring my letter to a close by bidding you goodbye. Believe me yours. — Philip Nugent

Write soon and let me know all about the draft and how their feelings is towards the draft and what your opinion in in regards to the war or when do you think it’s going to be done with.

Well Willy, they say there is no rest for the wicked and I believe it. Since I sat down to write this letter, we got marching orders so our regiment must go tomorrow morning to Black river to hunt Old Johns[t]on. The 13 Army Corps must go. 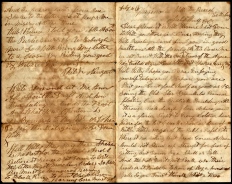 I sit down to write you these few lines hoping they will reach you and find you the family all well as this leaves me in at present. Well, Willy, I wrote a letter to you the 4th of July but got no answer. We are camped about 80 rods below Vicksburg but don’t know how soon we will leave for Port Hudson. I think it’s where we will go into camp but may go to Mobile from there. We must go from here but don’t know where. We have nothing to do here now and it don’t pay to lay up idle while there are rebs in the South. But I think it will soon be clear of them. They are well penned up in this country. There are only 3 places now that is strongly fortified—that’s Charleston, Richmond, and Mobile. And our forces have them in a small camps in these places. The West part of the Confederate states is about played out with the rebels. If the Copperheads of the North would keep still, I think the fall of Vicksburg would wind up the war. But I think this winter will wind it up anyhow in spite of all the Copperheads can do.

The citizens of this part of the South say the Confederate Army cannot lay in supplies enough to hold any fortification. They are in possession 4 months. If that is so, the war won’t last much longer. I think that after this month is over, we will pitch in again. We are going down next week to New Orleans from there. I think we will go to Mobile. When that place is taken, it will wind up the hardest of our fighting. As for Richmond, I think the Eastern troops ought [to] take that with what help we have gave them. Two army corps left here for Richmond. I think that place will come down before long.

The guerrillas are beginning to cut up again. The shoot into our boats along the river but we are stopping that purty fast. The weather here now is quite warm. It would be hard to work but we have nothing to do but lay in the shade or in our tents. It’s not near as sickly here now as it was a Young’s Point last winter. The City of Vicksburg is gone to ruin. They are not a house in it but what is shattered more or less with shell.

Well Willy, I believe I told you all the news now so you must write an answer to this and let me know how things are getting along there and how the crops is turning out this season. Also how Copperheads is getting along with their meetings or what their platform or principle is. Well, I must bring my letter to a close by wishing you goodbye. Believe me your friend, — Philip Nugent 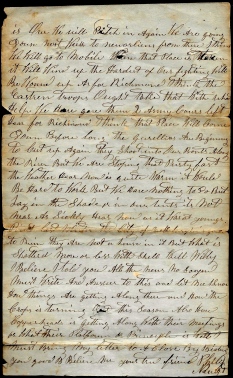