This letter was written by Henderson Owen in June 1862 from Union-occupied Memphis, TN, regarding the declining health of Asa Purnell Dupuy (1834-1862). He wrote the letter to Miss Emma W. Dupuy who must have been residing in somewhere in the North—possibly Missouri. Mentioned in the letter are two of Asa’s brothers, William Hall Dupuy (1836-1864) and John James Dupuy (1837-1898), both of whom were in the Confederate service.

Asa Dupuy served as a 2d Lieutenant in the 154th Senior Regiment Tennessee Infantry and was wounded in the fighting at Shiloh in April 1862. Apparently he returned to Memphis to recover from his wounds but never regained his health. Asa’s November 1861 Last Will & Testament confirms his residence on Poplar Street in Memphis.

Henderson Owen (1805-1878) was a native of North Carolina who was employed as a cotton merchant in Fayette county before and after the Civil War. He quite possibly had the worst handwriting of anyone I’ve ever seen.

Your brother John left the enclosed letter for me to forward in the event the Federals should come to Memphis. They are now here [as of 6 June] and as the mails are opened to your part of the country. I avail myself of the opportunity of writing to say that your dear brother Asa is still living but I fear that he cannot live. He is to all appearances wearing way. For the last two days he has been suffering intensely with pain in the head, the outside appearance of the faster than I have seen it. For _______ but his general health is not near so good. 8 or 10 days ago he had frequent spasms. For the past few days has escaped these but has right [   ] & leg—particularly his [   ] is badly paralyzed but not entirely so. Up to 14 days ago, he could walk about. [     ] but since that time he is unable to sit up for [   ]. He has the very best nursing care. D____ has never tired in her attention—day or nights. Fanny Ballard up to the time she left for Miss, nor one of the best of nurses a [     ] Alexander, a near neighbor, has been there every night administering like a sister nor [       ].

Now Miss Emma, I do hope you will without delay come down [     ably] to see your poor brother… It would be your highest pleasure to [     ] by his side… I am not entirely without hope but it is a feeble one of his recovery. You [   ] that he lives on Poplar Street some 200 yards west of a small Episcopal Church.

I have not had a word from your brothers Wm. & John since they left. Be of good comfort on the subject of the war. Our people are not alarmed. As for myself, God [  ] the North or South can change or alter the will of God in the final [    ] of that struggle. I know for my own self that [    ] miseries what they may, that God’s will is all I ask & pray for. My very kind regards to Mr. Smith & his family & to your other sister that I once [    ]. May I have the pleasure of seeing you. With best wishes, I am your sincere friend, — Henderson Owen

¹ Col. James R. Slack served as the Provost Marshal in Memphis in 1862. 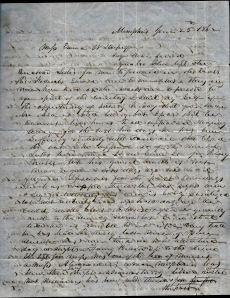 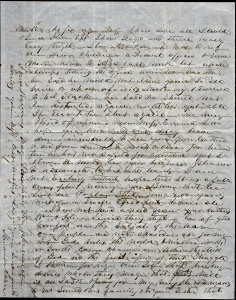