These two letters were written by Pvt. John Thomas Wilson (1839-1901) who enlisted in July 1861 in Co. H, 25th Virginia Infantry. Wilson was from the vicinity of Kerr’s Creek, Rockbridge county, Virginia. He was the son of William Alexander Wilson (1811-1882) and Mary Ann Hull (1817-1904). John’s father was a farmer and the proprietor of Wilson’s Springs—a resort near near Goshen. John probably wrote these letters to his sister Elizabeth Jane Wilson (1846-1926).

I started to write to you two or three days ago and there has been so much confusion in camp that I could not write. In the first place, this leave me well. We have ten recruits to our company in the last three days, all from our neighborhood. Alf[red] McCurdy, John Anderson, Dave & Daniel Snider, Granville Campbell, Whit Perry &c. Our company numbers 14 at this time—more than half of the regiment. I believe I told you about my trip in the mountains on the stampede from Cedar Run. I read a letter from Mother today written to James C. Snider. I was really surprised when James opened the letter & showed me the name. I couldn’t imagine what Mother was writing to Jim for. I know you must be very uneasy. I wrote to you as soon as I got back from the mountains & I wrote another last week. I can’t tell what has got into the mail.

I got a letter from sis a few days ago. She was well. She was fixing to go to Richmond and then she said she was coming home [and] going to bring Miss Williams with her. I tell you she was giving me particular fits about deserting. She said that you had told her that I was talking about deserting. She said she would sooner see me fill a soldier’s grave than disgrace the whole family for ever. I tell you, she poured it down well. I tell you I did think pretty strong of leaving about the time the Yankees had us so badly stampeded. I was beginning to think that we were gone up, when they went up to Staunton & left us backed up in Brown’s Gap. I was laying a many a plan to go out to Western Virginia by way of home but since we drove them down the Valley again, I don’t think we are so near gone. I have come to the conclusion that I will stand it out this winter yet & if there is no prospect for peace in the spring, I will change my mode of war for one that is not so hard. I don’t know where I will go yet but I am done fighting after this campaign is over certain. I believe the South has done her utmost. I think that we have gotten out all the men that can possibly be spared from home. If they take any more, the army is bound to suffer & the people at home will suffer before the army, that is certain.

So don’t think that we can support our army another campaign since all the men are already taken out. Everything is standing still at home & this winter will wind up what we have to eat for the army. So enough of that. I intend writing home hereafter once a week & I want some of you to do the same. There is no news that I can hear of now. Everything is still in camp. I don’t suppose there will be any more until the recruits is all armed. None of them have arms yet.

So goodbye. Your brother, — John 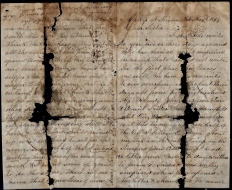 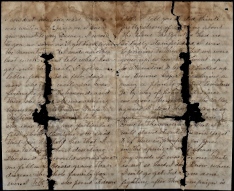 I take this opportunity to [write you]. This morning is very rainy and [we have remained] in our tents pretty much all the time….We all have…..Alf McCurdy, Perry & Allen. It has been raining for three days nearly all the time. If the weather would get good once, I believe that we would move camp up the Pike somewhere. The fire wood is getting very scarce here now. When we came to this camp first there was plenty of woods but the weather has been so cold that we had to use a great deal of wood. We have a nice camp in dry weather if we [only had fire]wood. We have water to carry about a quarter of a mile from a fine spring. It never gets muddy. It is always clear. That is one thing that we seldom have. We can seldom get to springs that won’t get muddy where the whole army get water. They dip camp kettles, canteens, and everything into the springs & in a short time it’s not fit for a hog to drink out of.

It was reported that we will go into winter quarters before long somewhere between here and [      ]. Troops are moving up the pike by us. They stay at one place until the wood is burned out and then they move up the pike. Some of the troops have left the Valley. Kershaw’s Division has gone over the mountain. It is one of the largest divisions in the Valley. I don’t suppose there will be any more fighting in the Valley this fall. I hope not at any rate. The [  ] Regs have gone into winter quarters now about Winchester. There was a couple……came up from Newtown the other day……the Yankees had fixed up for ……Winchester. I hope they may stay…. not fighting longer…this spring or next spring rather.

November 23d. I will try and finish my letter today as I did not have time to write any yesterday. I commenced it on the 21st & yesterday the Yankee Cavalry came up to Mt. Jackson. About one brigade and three divisions marched down 8 miles early in the morning to meet them but before we got down, our cavalry [met them] & scared them back without any fighting except some artillery shots that were exchanged. Our boys shelled them for about an hour before they got their pieces in position. It was the coldest marching that ever I done. Some of the boys came very near freezing before they got down. The snow was about two inches deep [and] the wind blowing very hard. It was after dark when we got back to camp.

I got a letter from sis last night. She had just got back from Richmond. She was powerfully impressed with her visit to the Capitol of the Confederacy as she called it. Said she was at Petersburg too. She saw Mr. Grant shelling our works. She said that she had been as far north and west as she could go & was indebted to Mrs. Williams for all the pleasure she had enjoyed. You must send me an overcoat by Father when he comes & a pair of socks also.

…..got a letter from……& said that ….was coming….or so with…..Alf McCurdy, Jim Snider….Anderson want Jim to bring a box for them. We will go into winter quarters soon. Give my love to all the family and write soon to your brother, — John T. Wilson 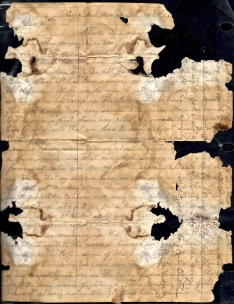 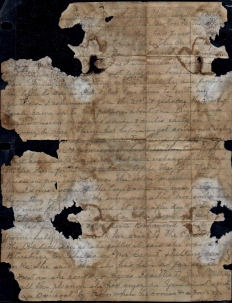