After the war, Deering settled in Iowa.

Your letter of the 15th inst. has been received. It came more quickly than usual. I wrote you the 5th from Hurricane Bridge. I have some correspondents answering  whose letters is like an exercise in composition and I have to feel is just such a mood before I begin but I sit down and write to you at any time so write more often that I otherwise should.

I hope you will write to Abbie for she would be delighted to hear from you. I am still in the 1st Brigade, 4th Division, 20th Army Corps. Gen. [Lovell] Rousseau did command our Brigade till he was appointed to the command of Northern Alabama. The rest of our corps is with Sherman at Savannah. There is a report that we are to join the. I hope it may prove true. We came to this place the 14th inst.

The town is dull now. No excitement except the thousand and one peace rumors which run their course through the camp. We think but little of the [Francis] Blair Mission. Grant and Sherman are our best peace commissioners at the present time.

Yes, I had a New Year’s present—was promoted to sergeant that day. We have had fine weather here for a week past. It has been very cold but clear and pleasant. Three is no snow. The shallow water is frozen hard enough for the boys to skate.

My health is improving slowly. I have had my eyes treated since I came here. Have them penciled out every day with nitrate of silver or else have sulphur of copper applied to them. It is harsh treatment but I think they are improving slowly.

Our captain [Pliny Norcross, of La Grange, WI] had a brother who was a captain killed at Memphis. [He had] another brother who was a lieutenant in the Navy [that] was killed off Wilmington. Captain has resigned and gone home. ¹ Sergeant [George W.] Steel will be either captain or else our 1st lieutenant. He is having the ague now. Sends his regards &c. He wrote you a few days ago.

I have to sit close to the fire to keep my fingers warm. We have just had a surgeon assigned to our regiment. He has not yet arrived. My regards and best wishes to all.

¹ Capt. Pliny Norcross had two brothers—one older and one younger—who served with the 13th Wisconsin. The younger brother, Frederick died at Nashville in May, 1865. They were the only Norcross brothers who served in the war according to Pliny’s biographical sketch. 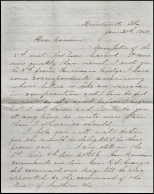