In the fall of 1861, William enlisted in the “Alabama Hickorys” which became Co. E of the 40th Tennessee Infantry (Confederate) Regiment. The naming of this regiment was somewhat unusual. It was organized at Memphis on 5 October 1861 and was composed of one Florida, one Kentucky, four Alabama, and four Arkansas companies. Since Colonel Lucius “Marsh” Walker was a Tennessean—and the regiment was organized at Memphis—it was presumed by the Confederate authorities to be a Tennessee regiment and so they designated it as the 40th Tennessee Regiment. The designation was challenged by the governor of Tennessee, however, which prompted the Adjutant and Inspector Generals Office to rename the regiment as the “5th Confederate Regiment.”  Unfortunately this only made the confusion worse for there was already another Tennessee regiment that had been designated as the 5th Confederate Regiment, and was known throughout the war as such.

The 40th Tennessee regiment remained at Camp Johnson, Memphis, with Colonel Walker in command of the post, until 19 November 1861, when it moved to Fort Pillow, 40 miles due north of Memphis. With it at Fort Pillow was Colonel Baker’s 1st Alabama, Mississippi and Tennessee Infantry Regiment. They remained at Fort Pillow during the winter of 1861-62 and were then transported to Island No. 10 where many of the members of the regiment surrendered when the island was captured on 8 April 1862. William Hagy was among those taken prisoner and was transported with his comrades to Camp Butler, Springfield, Illinois, where he died of “camp fever” on 26 June 1862, less than three months into captivity. He was among more than 800 confederate soldiers who died at Camp Butler during the 15 months it was used as a prison camp—victims of “inadequate facilities, poor sanitation, and disease.”

I seat myself down this morning to drop you a few lines to let you know I am well & very well satisfied. We left Memphis last Tuesday and landed here on yesterday. I have seen a great many new sights to me since I left home. Memphis is one of the finest looking places. Perhaps it is very near as large as Somerville. As we came through there, the streets was lined [with] people. I seen more people there than I ever seen in all my life before. There was 15 steamboats there. Some of them was 500 feet long.

As we came up, it rained and blowed in on me & some more of the boys got wet. There is several of our boys sick with the measles. We left John Tunsill, Lem [  ], Pate [Peyton] Cryer, Bill & Dick Draper, Elick [G.] Denton, John [W.] Sandlin, [and] Lee Newsome in Memphis at the Southern Mothers till they get well. They are waited on by woman there. Matt [T.] Chunn, John Smith, Frank [M.] Russell, Pate [Peyton M.] Collins, [and] Bill Hartsell are here with the measles. Three of them are in the hospital here.

We have got to the highest mountain I ever seen. We are on the top of it. We can see for 50 miles up the river. We have the river blockaded below us. Our cannons are planted on the edge of the bluff next to the river. The river is about four or five miles wide here. ¹ There is a ditch all around us that no Yankee can cross. There is three thousand negroes working on the fort. This is one of the best forts here that is in the Southern Confederacy. On the side next to the river, the bluff will keep all the Yankees back and on the other side of us is the ditch that no one can cross. If they come over our cannons, we can whip fifty thousand men with our regiment. There is some of the steepest hollers here you ever see. ²

The picket guard is a mile & a half from camp. I have not stood guard but one twenty-four hours yet. We have fine tents. They are floored with plank. The floor is about 2 foot off the ground. I have got two of the finest blankets you ever seen. I hate to lay them down on the floor to get them dirty. If I had any way of sending them home & had some old ones, I would have done it. We have plenty to eat here and nothing to do.

I want you to write me all of the news, how you are getting along with your cotton, & write what John Stuart is doing—whether he is making a company or not. Tell Bill McCarley he had better come to us. We have fine officers. Bill is one of the finest little fellows I ever seen. The boys are all very well pleased. I must bring my letter to a close. I will write you all the news the next time I write. Give my love to all my friends. So nothing more. Write as soon as you get this. I remain your son until death, — W H. H. Hagy

¹ Hagy’s estimate of the width of the Mississippi river opposite Fort Pillow seems incredulous. The river has changed its course since 1861 but modern-day estimates of its width at that time would be closer to a half mile.

² Fort Pillow was constructed by slave labor in the fall of 1861. It was located on the east bank of the Mississippi River and named after Confederate Brig. Gen. Gideon Pillow. “It stood immediately below the intersection of the river and Coal (or Cold) Creek and featured three lines of earthen entrenchments—a semicircular outer line of earthworks, a shorter second line atop a prominent hill, and the fort itself, with earthworks six to eight feet high and four to six feet across. A 12-foot-wide, six-foot-deep trench fronted the fort. The fort’s earthworks extended in a 125-yard-wide semicircle, behind which the land fell away rapidly to the river. Deep ravines crisscrossed the landscape in front of the fort, and four rows of barracks stood on an open terrace of land southwest of the bastion.” 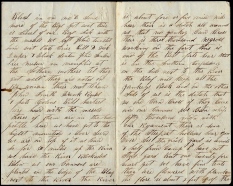 I take the present opportunity of dropping you a few lines this evening as I have written & have not received an answer yet. I am not more than able to write this evening. I have had the measles again but I am getting tolerable stout again. I stayed in the hospital from Sunday till today & I would not stay any longer. They would not give me anything to eat. I think I will be able to help the boys about our house soon. We will stay here this winter. We are all building us a cabin to winter in. Very near all of the boys that came from Morgan has had & got the measles. I can not write very much this evening as I am very weak but I will give you one of the letters in a short time. I have  great deal to write you.

There is not much sickness in camp but measles. You have no idea how I would like to see you all for a short time. If I can keep my health, I can do finely. I have not stood guard but once since I left home but it has not been on the account of sickness.

This is a tolerable fine place here. Our guns came here last night. There is more cannons & more balls & grape shot & bung shells than a few. Our men are practicing every day with the cannon. There was one of our boats tried to pass without landing & we fired a blank cartridge at her & she did not notice it and then we turned loose a ball just before her. You ought to have seen her begin to make her way back to shore. The order is here not to let no boat pass without landing. I believe that is all I can tell you at this time about the boats.

I want you to write how your hogs are getting along & how you are getting along with your cotton & whether it is worth anything or not. Mother, I will think of what you told me as long as I live. I can not write any more. Tell all of the boys howdy. Tell Martha & Cathy I will write to them soon. Give my love to John B. Stuart. There is nothing else I have to tell you. I can not pay postage here for letters as there is no post office here & letters are passed by hand to us. You must write soon without fail. So nothing [more]. I remain your son until death. — W. H. H. Hagy

Excuse this letter as I am not able to do better at this time. 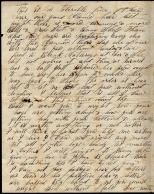