James enlisted on 5 September 1864 in Co. G, 211th Pennsylvania Volunteer Infantry. He remained with the regiment until 2 June 1865, serving “10 months and two days” according to the 1890 Veterans Schedule.

After the war, James attended Allegheny College and graduated in 1869. In the 1870 US Census, he was enumerated in Warren and identified as a “law student.” In the 1901 City Directory of Warren, he was identified as a “United States Commissioner.” 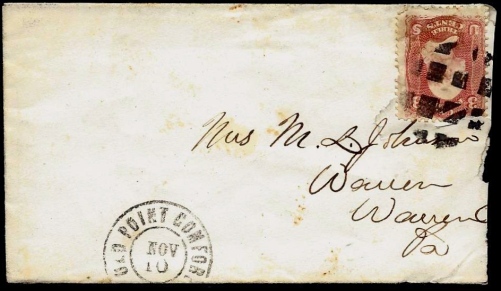 I have received several letters from you since I wrote you last. The last one came this morning dated November 3rd. Although I have not  written in so long a time, you must not be disappointed if this is short as I am rather unwell today. Am suffering from an old fashioned headache a little. I do not know what caused it. It cannot be as it generally was at home, from over eating, as it would be impossible for one to hurt himself in that way here unless he had more money than I’ve got. I rather think it was caused by sleeping in a room in which there was a fire. We have been very busy lately building winter quarters & last night just got our fireplace built and kept a good fire all the evening. If that is the reason, my cure is near—picket tonight in the rain. Do not be at all alarmed. If I should be sick, you shall know it.

I was somewhat disappointed when I found that you missed sending me anything by Charley Dick but I guess it is just as well. He probably could not get here as his regiment is across the river. He has been here and probably he could not get anything to me as well as you could send it from home direct by mail or express. I am afraid also that McKelvy will not be able to get here unless he comes as a commissioner of elections. I think so because one never sees citizens here except sutlers & their clerks. But if you send anything by Andrew Holliday, it will get to me surely. I wish you would send me either by him or by mail a little money. I am out and payday is by no means a “sure thing.” Also as soon as possible, send me a pair of gloves or mittens. If the latter, with one finger separate on each hand. I would like to have you send me a pair of warm flannel drawers sewed very strong. These army drawers are very good for spring & fall but are not warm enough for winter. My wants are numerous, ain’t they?

Picket duty is very trying now. We have enough men in the company for two reliefs of 18 men each & 4 men over, and should have enough for three as some have to go out every other night. It comes on me just about every other time now. No fires are allowed during the night and the nights, if it does not rain, are uncomfortably chilly and I need those gloves very much such times. Make very long wrists to them without fringes., the same way you used to make them.

Johnny Russell is much better [and] will probably be here soon. Eugene McKinney is very sick indeed. I was at the hospital one day at Point of Rocks last week and it is quite a comfortable place—especially if one is very sick. They have very good, clean beds and I saw one or two white ladies nursing the sick. That was more of a sight than anything else, except a little white girl I saw about four years old.

Today I was counting up the letters I have received and not answered and there was more than a dozen. That would not be many at home but here when time & materials are so scarce, it is quite a formidable array to contemplate. I guess my letters to you must do for the whole family. I have so little time. Is Ohma [?] never going to write to me?

You spoke of McKelvey’s thinking there was something on my mind that I did not wish to disclose to him. I think he imagined the greater part of that. There is nothing I can think of that could have given him such an idea. If there was, I should most assuredly confide it to you. I am sorry he alarmed you so needlessly. Of course I am somewhat dissatisfied with some operations I see here, but don’t think I am homesick or anything else the matter with me to the extent that he imagines. True, I should like to see Warren & Warren friends once more, but am content to wait till the times comes that I can do so honorably. I presume Mrs. Ann Cotham intends to write to me. That is generally what folks want of addresses of soldiers. Your letters & issues of October 30th arrived safe. Much obliged for the papers & magazine. Did you see those picket anecdotes in the “Drawer” of Harper? 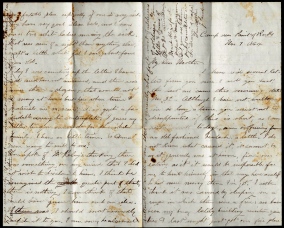 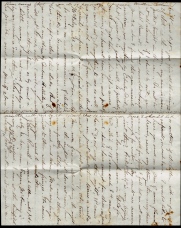