Nehemiah enlisted on 17 August 1861 as a private in Co. K, 86th New York Infantry and rose in rank to corporal before he was mortally wounded in the fighting near the Devil’s Den at the Battle of Gettysburg on 2 July 1862, dying the next day. His military record indicates he had previously been wounded in the fighting at Chancellorsville on 3 May 1863.

[Note: These letters are from the private collection of Walter Slonopas and are published here by express consent.]

I received your last today. Glad to learn that you are on the gain & in fair prospects of soon being able to do light if not heavy labor.

I think that in my last to you, I spoke of my writing some time ago to the commanding officer of your company to learn something concerning you. I received a reply today which I enclose that you may see that it is not expected by your officers that you will return & it appears to me that you might easily get a discharge from the surgeon of the hospital where you are, if you have a rupture as stated by Lieut. Scobey. I do wish you could be set at liberty & come to Washington while the 86th is here. Try it & see what you can do.

I with a few others went with rebel prisoners as guard up the James river within two miles of Richmond where an exchange of prisoners was made. Started 30th [of] last month and returned today.

It lacks only four days of a year since I enlisted. The way things are running, don’t expect to get out in several years to come. There is nothing about it that I like. Wish I were clear now. You get out if you can.

I have heard nothing from Wesley—afraid he was killed. Please write soon & let me know what the prospects are of your becoming a free man.

This from your brother, — N. W. Winship

Nehemiah wrote this stirring account of the Battle of Fredericksburg from his vantage point on the north side of the Rappahannock river where he was posted to guard his company’s equipage while the regiment crossed over into the city with the Third Corps and took its reserve position on the extreme Union right. Though not directly engaged, the 86th sustained a few injuries before recrossing the river on pontoons near the Lacy house.

I have neglected so long to write you that now my shame almost prevents it at this late date, but hoping that by your indulgence to be forgiven, I will venture a few lines acquainting you with the doings & whereabouts of the 86th [New York Regiment].

We are now & since two or three weeks before the Battle of Fredericksburg have been on our present encampment about 2 miles north of said city, doing picket duty, drilling &c. The regiment was in the city during the whole affair and the most of the time so placed that the shot and shell from both the Rebs and our guns passed directly over their heads & some plenty near enough to admit of comfortable feelings. However, none were killed & but two wounded & those the day previous while attempting to cross the river into the town. I being left in charge of our company effects—tents, knapsacks, &c.—had an opportunity of viewing the battle “rage from far.” It was a grand sight, but horrible was the slaughter. I saw thousands of the wounded as they were recrossing [the river] and going in search of hospitals.

To get to our present locality, we have had to march many weary miles & experience the hardships to which the soldier is liable, as fully as I care to. Went by the Harpers Ferry, Manassas Gap, Hillsborough, & many other places, some notable for the military achievements that have been enacted in their locality & others unmentioned by newspaper column monopolyers but which should have judging from their lonely appearance & the desolation surrounding them—a sad history of their own, recorded only in the memory of their deluded inhabitants.

[Our brother] Wesley is supposed to have been taken prisoner at the Battle of Fredericksburg as nothing has been heard of him, nor those with him since. He belonged to the Pioneer Corps.

I am at present acting commissary of the company. We had orders to march this morning but they were countermanded, but expect to leave for some other place tomorrow.

Now James, it is almost impossible for us to get stamps or paper—the latter selling here at 50 cents per 24 sheets. This is the great obstacle in the way of writing, but do not wait for me, but write as often as you can. It is so cheering to hear from friends & know what they are doing while we are away from them. My love to Uncle & family. 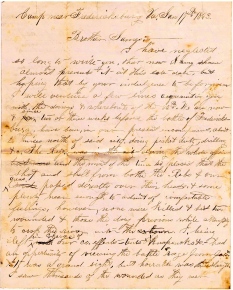 Yours of the 1st inst. enclosing a couple of stamps & a sheet of paper came to hand in due time, and a few moments of this day shall be devoted to writing a reply. The 86th [New York] boys are still camped on their ground occupied for some time before my last to you, and are in their usual gleeful mode with the exception of those times when the rain comes down, flooding tents & drenching the excellent furniture of our commodious dwelling, or when one of the Virginia snowstorms come while on picket. Then there is some pleasant grumbling, and many wishes to be at home are expressed.

A few days ago we buried one of our company—C. Vaughn ¹ of Jasper. He was unwell for some months before his decease and had not the captain been afraid of troubling “his worthy self” a little, he would have got a discharge and been home long ago & perhaps recovered.

My health is usually good and I am more fleshy than ever before—161 lbs is my weight. “Uncle Sam’s” hard tack and pork and salt horse seems to be the kind of food to fat[ten] me on.

Received a letter from Father today. He was not as well as usual. Wesley is still at Camp Parole [in] Annapolis, Maryland. George & Cordelia are still at Troopsburg. I want to help her to go to school as much as it is in my power to do. She leans easily & by help may become a good scholar.

The little “gal” I correspond with is also attending the school. Think I could enjoy myself there this term if “Uncle Sam” would release this grip on me and set me free. Wish I were with you instead of here. Do you hear from your regiment [3rd Iowa Infantry] often? And where is it?

P. S. Those stamps came good. All the way I can get any is to send to some friend and have them forward. There are hardly ever any brought in camp except those sent by friends. If ever I get where there is a chance, I will get my picture & send it to you. 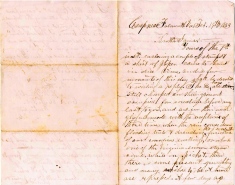 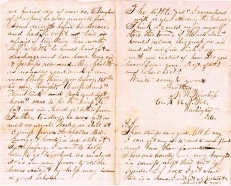 Nehemiah’s letter on 11 May 1863 provides an account of the role played by the 86th New York Infantry during the Battle of Chancellorsville.

I am still one of earth’s living, moving creatures although you may have concluded differently from my so long delaying to write you. The fact is, laziness & the inconvenience of writing since soldiering has been my business get the master over me & almost total neglect is the consequence. However, I have got at it once more & will try and tell you something of what we have been doing for some months past.

The principle part of our time since the Battle of Fredericksburg to the 29 of April was spent at the simple duties of camp, drilling a little, policing and picketing. The latter we had to do three days in every 9, and go three or four miles to do it.

April 28th we started out with 8 days rations & 60 rounds of cartridges and marched 8 or 10 miles down the river (Rappahannock) where some of our troops crossed after having a slight skirmish. From here, after staying over a day & witnessing several times the ascension of two men in a large balloon, we were ordered back as far up the river to the U. S. Ford, which by traveling nearly one whole night and some in the day time, we reached & crossed over on a pontoon bridge.

After passing many formidable Rebel breastworks & fortifications which some of our troops had taken a day or two previous, and laying over a few hours to rest a little, we were marched towards the front where some fighting had been going on and where the cannons report & sometimes sharp musketry could be heard. Thus we (the 3rd Division, 3rd Corps) fooled about & passed the time till Saturday morning, May 2nd, when we were ordered several miles to the right where [Hiram G.] Berry’s Division—same Corps—was likely to be overpowered by the grey-coats. ¹ We got up near there and about 4 o’clock p.m., marched down through a swamp thickly covered with small trees and thick underbrush into a large field at the foot of a hill thickly covered with small pine trees towards which we kept marching.

The Brigade closed in mass. All at once down came a shower of balls right among us from the pines on the side hill. All fell flat on their faces. After a little [while], the order to arise and advance came but one regiment (122 Pa. Nine-month’s men) being next in front of us, broke and fell back through our ranks & raised quite a rumpus. But soon partial order was restored and after some had fired a few rounds, all were ordered to fall back. But before going far in that direction, firing was rapidly going on in what was our rear when going through the swamp. It was dark by this time and the Rebs had surrounded us. ² Skirmishing continued at intervals all night.

Early next morning there commenced one of the severest battles of the war. Our regiment supported a battery for awhile, then advancing to within 15 or 20 rods of the Reb’s lines, we gave them the contents of our cartridge boxes and at one time drove them. But soon it was found that they were about to flank us & we were ordered to fall back. ³

But my paper is used up. Suffice it to say that we lost our Colonel [B. J. Chapin], several commissioned officers, & many men. I was taken prisoner and after being in their hands 10 or 15 minutes, was retaken. I was slightly wounded in the thigh.

The weather is very pleasant & we are now enjoying it in our old camp to which we returned after being away over 8 days. Another move is expected soon.

¹ Nehemiah does not give the reason for this advance (perhaps they weren’t told) but according to records from the battle, Whipple’s Division (which included the 86th NYV) was moved up the Plank Road on 2 May 1863 for the purpose of intercepting a Confederate wagon train, which was moving south on the old Furnace Road. It was in the rough (brushy & swampy) country beyond Hazel Grove that the 86th came under fire and were eventually driven back to the Grove.

² In the twilight as Whipple’s Division (including the 86th NYV) were retreating toward the Chancellor House, they encountered the enemy advancing in Stonewall’s flank attack and were nearly cut off and surrounded. In the darkness, the men had to fight their way back to Union lines.

³ On May 3rd, the 86th NYV provided support to pieces of artillery stationed south of the Plank Road and helped to turn back several attempts by the Rebels to capture these guns.  It was later in the afternoon when the Rebels attacked the the Third Corps lines west of the Chancellor House and where they lost most of their officers and men.