This letter was written by William Thomas Applegate (1831-1904), a native of Bullitt county, Kentucky and a farmer when he enlisted on 7 November 1861 at Shephardstown, KY, to serve the years in Co. B, 28th Kentucky Infantry. He was quickly promoted to 1st Sergeant and once again to 2d Lieutenant in April 1862, often serving as the Acting adjutant of the regiment. His military record indicates that he resigned his commission in November 1862 while at Bowling Green, KY, citing his wife’s illness and his own disability from  broken leg.

When Applegate wrote this letter from Camp Stoneman—a cavalry depot near Washington D. C.—it is unclear in what capacity he had traveled there. It may have been in a civilian capacity as his pension record indicates no other military service than that of the 28th Kentucky.

Applegate wrote the letter to his friend, Dr. Charles Hunter Carothers (1825-1891) of Washington, Clark county, Missouri, who was appointed as the postmaster of Fairmont Post Office in 1862. Charles was the son of John C. Carothers and Anna Roe.

Camp Stoneman, District of Columbia
Near Washington City
May 18, 1865

Yours of date May 22th came duly to hand this evening [and] contents noted. Was pleased to hear from one of my old friends—especially one that has felt the effects of this war. I can appreciate your feeling now that this cursed war is about played out. Doc, I know how you feel and I can guess how the good rebels feel. Oh how good they are getting. God damn them—the devil never will get his own until he gets every damn rebel that now lives. Some of them are going to get their just desserts here in Washington before the Military Commission that is now in session trying (8) eight of our late President assassinators. The last one of them will be hung. If they do not, I will give up my guess. ¹

Doc, I suppose you will protect our friend Capt. [Isaac Darnell] Hon. ² He was so good to you and me and our friends. Well you know every dog has his day and I suppose Capt. Hon has had his day. I hear that they was organizing the militia again in Clark and Lewis [counties]. I suppose Hon will get another commission (in a horn). As for my friend Clark and his lady, all I can say for them is God speed them on their way. They are some pumpkins.

I wish Ben Fleshman ³ may be prosperous in his undertaking for I think Old Man had the big head and needed something to cure him and I think he will find the necessary medicine in Ben Fleshman’s store.

As for the new Constitution, I am in for it my whole length and I think it will be carried with a large majority. Then look out rebs—you had better stand from under for it is going to make a smash.

I am glad to hear that you are going to have good crops in Missouri this year. I am in hopes that I will be at home by fall to enjoy the fruits of your harvest. Doc, I sent you a Washington Chronicle. Did you get it? I send you another with this letter. You must excuse my style of writing for I am a poor hand to compose a letter. You must take the will and not the style.

Present my compliments to Mrs. Herrick and family and enquiring friends—if I have any in Fairmont.

Doc, this is a pretty country. If I was worth a million, I would like to live here. I have been down to the city and visited the Smithsonian Institute and the Patent Office and the Botanic[al] Gardens. I would not [have] missed it for one hundred dollars. In the Smithsonian Institute you can see everything from a gnat to the ostrich, from a tadpole to an alligator, and from a mouse to an elephant and ever other thing that ever was thought of. And then in the Patent Office you can see the progress of the American people. You will find the old wooden mole board plow up to the present improvement. The greatest thing there is a model of a steamboat that Abe Lincoln made. It will be preserved as long as the American people live.

I must close hoping to hear from you again soon. I remain your friend, — W. T. Applegate

¹ The following is another excerpt taken from a letter written on 24 April 1864 by W. T. Applegate to his friend, Dr. Carothers: “We got to Washington City the night the President was murdered. You never saw as much excitement in your life. They have not caught the murderer yet. We are expecting every day to hear of his arrest. I do not think there is any chance for him to make his escape. There is one hundred thousand dollars reward offered for his arrest. I was in Washington City at the funeral of President Lincoln last Wednesday [April 19] and it surpassed all processions I ever saw. There must have been one thousand yards of black Cambric around the columns of the Capitol and there is no telling how much crepe there was in the inside of the rooms. The remains of our late President left here last Friday. It will not reach Springfield until next Wednesday week. They are going to the principal cities of the East.” [From The Fellers Called Him Bill, by P. J. Kearns, page 244]

² Capt. Isaac Darnell Hon (1823-1903) was a native of Montgomery county, Kentucky. During the Civil War he served as Captain of Co. F, 2nd Provisional Missouri Militia. After the war he moved to Cowley county, Kansas. 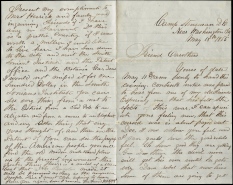 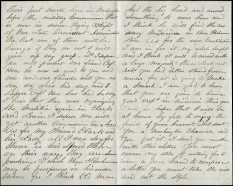