These two letters were written by John Bamford (1827-1890) who first enlisted in Co. C, 9th New Jersey Infantry and was appointed regimental quartermaster sergeant. In 1864 he was discharged from this regiment to accept a commission as 2d Lieutenant (later Quartermaster) of Co. H, 3rd New Jersey Cavalry. The first letter was penned while serving in the 9th NJ Infantry; the second while serving in the 3rd NJ Cavalry. He wrote both letters to his daughter, Emma F. Bamford (1852-Aft1905) of Gloucester, Camden county, New Jersey. Emma (1851-1908) married Jesse K. Mines (1846-1897) in April 1890, one month after her father’s death.

An obituary notice for Bamford published in the Philadelphia Inquirer of 3 Mary 1890 states that Bamford was born in Trenton on 27 September 1827 [some sources say England] and that prior to coming to Camden in 1858, he was a deputy State Prison keeper.

When Bamford left to serve his country, he was a 33 year-old widower and proprietor of the Ferry Hotel in Gloucester. The hotel was located at the foot of Kaighn’s Point Avenue where the Reading Railroad depot was later built about 1900. He was assisted in the running of the hotel by Susan Hendrickson (mentioned in one of these letters). After the war, Bamford returned to Camden and resumed operation of the hotel, which he managed for a total of twenty years. In 1883 he was elected to the State Legislature and he remained active in the GAR. He died on 2 March 1890, his residence being at the time 249 Mount Vernon Street in Camden, New Jersey. He was buried in Evergreen Cemetery. I could find no mention of Emma’s mother; she is not buried with the family in Camden.

The Ferry House was built in 1770 at the corner South & Kaighn Avenue in 1770 as a residence and later turned into a Public Inn. Theodore Krug bought the property from Bamford in 1883.

A Plat of the Ferry House and Beer Garden. Bamford had a license for serving spiritous liquors in 1860 and employed a bartender

[Note: These letters are from the private collection of Richard Weiner and are published by express consent.]

Yours of the 27th was duly received and I now take great pleasure in answering it. I am well as present and hope these few lines will find you all the same. I hope you will continue on going to school this winter and learn all you can for now id your chance. You must pay all your attention to your study now and give up your childish plays and so forth for you are getting to be a big girl now and the little girls in your school will begin to talk about and say you are dumb and won’t learn and this won’t be very nice for you to hear.

You say that you would like to have some money for Christmas. Well in this letter I will send 5 dollars, two-fifty for you and two-fifty for Susan [Hendrickson] for spending on Christmas. I wrote to Susie last week and put 20 dollars in it and send Ed a letter yesterday so I hardly know what to write about today for there is no news here to write about. It is very could here now ad freezing.

Send me yours and Susan’s likeness if you have them taken by Doct Stoops if he has not left.

When you get this letter, write and let me know what you want. No more at present. From your affectionate father, — John Bamford

Love to all. Write soon and often. If you go to the farm, don’t go alone. 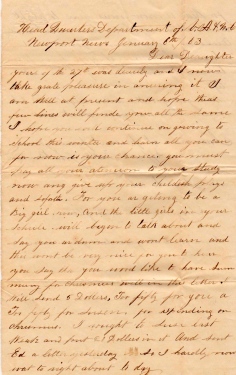 I received yours of the 30th of last month and was very glad to hear from you all although sorry to hear that you was not very well. Hoping these few lines may find you all enjoying good health as it leaves me at present.

You speak of me changing my clothing. Well I will tell you since I lost my valise and everything that I had, the way I do when I have a chance, I take them off and have them washed and as soon as they are dried, put them on again. This is the way I do for I have not got anything—only what I have got on my back—for we are not allowed any transportation whatever.

We have met with quite a loss on the 5th of this month. Lt. [Barnet] Birdsall ¹ went out on a scouting party with Company F of our regiment and was killed. He with Capt. [Thomas G.] McClong took the advance and they had not gone more than four miles before they run across a party of guerrillas where they had a fight and was killed instantly with two other men of Company F. The day before I went on the same road with only eight men on a scouting party and run across a party of guerrillas of eight and drove them, capturing horse, cart, and some provisions, and then returned to camp. So you can see that I was very lucky in getting out as I did. They stripped Lt. Birdsall of his coat, pants, and shoes, and even the rings that he had on his fingers and left him right where he was shot in the middle of the road.

Company H was ordered out to get his body. After driving the Rebs about a half mile, they came across the body of Lt. Birdsall and fetched him in camp. There was quite a time for awhile. Our boys wanted to go back and give the rebels another fight but the Major [William P. Robeson] thought it not advisable so they did not go. Lt. Birdsall’s body was embalmed and sent home yesterday.

Now Emma, I hope that you are going to school by this time and let me know in time what you want and I will try and get it for you. I want you to go to school and learn to be a good scholar and I will pay whatever the expense may be.

Our duty is very hard at present for we are all the time on duty on the outside of the post.

I hope the people that has so much to say about me getting married will tend to their own business and not tend to mine for when I get married, I will tell you. So you need not believe everything of that kind you hear. I wrote to you in my last letter about losing my horse, saddle and bridle and all of my clothing except what I have got on my back. So you see that I have got very little to carry with me.

Well I must close for the present hoping these few lines will find you all in good health as it leaves me at present.

Give my love to Mother, sister and all the rest of my inquiring friends. Write soon and often. I don’t think we will get paid off for two month more.

¹ Lt. Barnet Birdsall, Co. H, 3rd NJ Cavalry, of Cumberland county, NJ., was killed by guerrillas at Warwick Bridge, VA, on 5 July 1864. His body was returned home and buried in Seventh Day Baptist Cemetery, Shiloh, New Jersey. A reporter wrote on 29 July 1864 in reference to Birdsall’s death, “This is a taste of what picket duty exposes our men to in the front. It is one thing to meet a manly foe on an open field, but to be entrapped by bushwhacking murders is quite another.” [Newark Daily Advertiser, 3 August 1864; cited by Peter T. Lubrecht in his book, New Jersey Butterfly Boys, The Hussars of the Union Army]